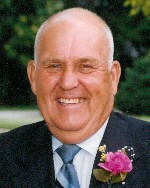 Mr. Kettler was a gas fitter retired from Illinois Power Company after 40 years of service.  He was also a 60-year member of Plumbers & Pipefitters Local 101 in Belleville, IL.  Harry was an accomplished handyman, able to repair or fabricate almost anything.  He enjoyed sports and especially woodworking, at which he excelled.  Most of all, he enjoyed his large family, always ready and willing to help in whatever manner needed.  If Dad was on the job, his family knew it would be done “the right way”.  Harry was a loving husband, father, grandfather, and great-grandfather.

He was preceded in death by his wife of 64 years, Mildred H., nee Miller, Kettler, whom he married on January 21, 1951, and who died on February 5, 2015; his daughter, Darlene Mitchell; his parents, Harry W. Sr. and Olivia, nee Schwartz, Kettler; four brothers, Leslie, Robert, Ronald, and Donald Kettler; and two sisters, Harriet Kettler and Maxine Helmholt.

Funeral:  Private family services will be held on Friday, February 27, 2015, at the funeral home.

Don & I are so sad that you all are going through this pain and sorrow again so soon. Although we could not make it tonight, our thoughts and prayers are with you. We will be nonating to hospice. God bless you all.
With deepest sympothy,
Don & Betty Wykoff

I worked at Illinois Power in the Metering Dept. Harry was a joy to know. He will be missed!
George G Schaub Sr.

Harry was a very good man and he cared about people in a christian way, happy and optomistic. He will be missed. God Bless Harry and may the Pease of the Lord be with him.
From the Town that makes Pipe Fittings that will go up hill