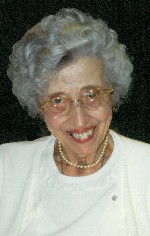 Helen attended local parochial and public schools, graduated in 1937 from Illinois College, Jacksonville, IL, with a Bachelor of Arts degree, and received an MBA from Saint Louis University in 1959.  Her teaching career included Illiopolis Illinois Community High School and the Belleville Public School District, including Central Jr. High School. In 1985, she received the Distinguished Citizen Award from Illinois College, and in 1987, was awarded an Honorary Doctor of Law degree from the college.

During World War II, Helen served as the director of NCCS – USO Club in Alexandria, LA.  She worked for the American National Red Cross for more than 32 years.  From 1959 to 1961, Helen was assigned to Japan as Director of Personnel for the Far Eastern Area office, and then returned to the United States to become Director of Personnel for the Midwestern area until her retirement in 1978. She enjoyed her involvement in the St. Louis district of the retirees from the American Red Cross.

Helen was a parishioner of St. Augustine of Canterbury Catholic Church in Belleville, was a member of the Ladies Sodality, and served as a lector and Eucharistic Minister at the church.

Memorials may be made to the charity of the donor’s choice or to any of the organizations listed above.   Condolences may be expressed to the family online at www.rennerfh.com.

On behalf of the officers, directors, and members of the St Clair County Historical Society, I offer our sincerest condolences to the Grandcolas family on the loss of a truly remarkable woman. Helen Grandcolas was a Life Member, Past President, and Volunteer of the Year in 1997. We would not be what we are today without her.

My thoughts and prayers are with all of you. It has been my pleasure to know Miss Helen. May God hold you close and comfort you.
Ava Carr