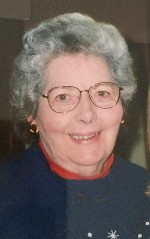 Mrs. Rakers was a nurse assistant and retired from St. Elizabeth’s Hospital after 28 years of service. She was a member of St. Peter’s Cathedral Catholic Church, Belleville, IL. Helen loved quilting, baking, and bowling.

She was preceded in death by her husband of 54 years, Ralph Rakers, whom she married on October 30, 1952, and who died on April 22, 2007; her parents, Henry and Mathilda, nee Lange, Kramper, three brothers, Andrew Kramper, Leo Kramper, and Maurice Kramper; a sister-in-law, Marion Kramper; and a brother-in-law, Melvin Luebbers.

Memorials may be made to St. Peter’s Cathedral Catholic Church, Belleville, IL. Condolences may be expressed to the family online at www.rennerfh.com.