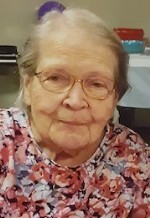 Mrs. Schneider was a devoted wife and loving mother, grandmother, and great-grandmother. She was an avid quilter and loved to sew for her granddaughters.  Helen was proud of her garden of fruit, vegetables, and flowers which she shared generously. John and Helen enjoyed weekend dances well into their 90’s.

She was preceded in death by her husband of 66 years, John E. Schneider, whom she married on January 17, 1948, and who died on April 15, 2014; two sons, Dean Schneider and Dave Schneider; her parents, Arthur and Elizabeth, nee Reinhardt, Hentzel; two brothers, Herbert and Wilmer Hentzel; and a sister, Martha Hanft.

Memorials may be made to the Schneider Family Cemetery, c/o Phyllis Eggemeyer, 718 Illinois Avenue, Waterloo, IL 62298.  Condolences may be expressed to the family online at www.rennerfh.com.

According to Helen’s wishes, her remains were donated to Washington University School of Medicine.