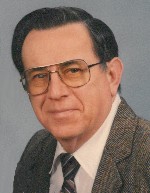 Mr. Haas retired as an inspector for DCASMA, a division of the U.S. Department of Defense in St. Louis, MO.  He was a member of St. John the Baptist Catholic Church, Red Bud, IL.  Henry was a U.S. Air Force veteran, serving from June 1952 to May 1956.

He was preceded in death by his first wife of nearly 24 years, Marlene H., nee Deichmann, Haas, whom he married on June 10, 1959, and who died on April 3, 1983; his parents, Henry G. and Catharine, nee Reeb, Haas; a brother, Paul Haas; three sisters, Florence (Oliver) Dahm, Irene (Floyd) Mueller, and Viola (Albert) Eros; and a brother-in-law, Orville J. Schmidt.

Henry, I’m saddened to learn about the passing of your father. Our prayers are with you and your family.

Sending prayers and sympathy to all during this difficult time, sorry we can’t be there in person for you

May God bless you and your family at this time of need. Your father was truly and inspiration and hero for this country.

Henry, may God bless you and your family at this time of need. Your father was truly and inspiration and hero for this country.

Henry, I was sorry to hear about the passing of your father and my prayers are with you and your family. Honoring your father’s service to our country and our freedoms.

Jane I went to school with Henry, CGS. My husband bowled with Henry for many years at Bel-Air Bowl. Please accept my sincere condolences. He is in a much better place that we all aspire to achieve.

Bob and family,
Everyone in our family sends their deepest sympathy on the passing of your father. May he rest in the peace that only Jesus gives to us.
Love from John & Carmein and family

My deepest sympathy to Jane and Henry’s family for your loss. Henry was a great companion through out grade and high school days. I remember these days dearly with him. He will be remembered dally in my prayers. Again my sincere condolences for the loss of Henry. Mel Lucash

We are so sorry for your loss. We remember being next door neighbors on Whitlow.