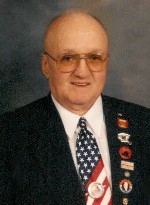 He was preceded in death by his parents, Carl and Leona, nee Schwanner, Weilmuenster; four brothers, Charles, Joseph, Oscar and Paul Weilmuenster; and a sister, Leona Seitz.

Memorials may be made to the RJ Krause All Stars Sports Club.  Condolences may be expressed to the family online at www.rennerfh.com.

Visitation:  Friends may visit from 4 to 8 p.m. Wednesday, January 14, 2015, at George Renner and Sons Funeral Home, Belleville, IL. A joint Korean War Veterans and American Legion ritual will be held at 6 p.m. Wednesday at the funeral home.

I am so very sorry for your loss, he will be missed by all of us. I will miss seeing him at all the bunko’s and bingo’s and he truly enjoyed being part of all the fun evenings. It just won’t be the same without him.

Sorry For Your Loss. Please accept this electronic message in lieu of a Sympathy Card. Local National Active and Retired Federal Employees Association (NARFE) volunteers provide help in reporting the death of any federal civilian retiree or a retiree’s spouse to proper authorities. They will explain the process as needed and if requested, can report the death to the Office of Personnel Management (OPM) for you. The NARFE Service Center is located in building 50, Scott AFB. You may visit the Service Center on Tuesdays, 10AM to 2PM or call 618-256-9350. You may leave a voice mail message at other times and we will return your call the following Tuesday. You may also call either of our Service Officers, Gene Wiggins at 618 566-7980 or Dean Hemmer at 618 233-3819, for immediate assistance if required

Dearest friends,
We are very sorry to hear of your loss. Hank was a nice man and always treated everyone with sincere kindness and generosity. We fondly remember conversations with him about his “ta-mitas” and the roses by the garage. Sending thoughts your way.

My thoughts and prayers are with you and your family on your loss. He’ll be missed at Bunco. Had planned on coming to the visitation at the funeral home but time was too shortso wasn’t able to stop by.