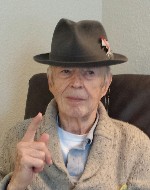 Mr. Lantz grew up in Oswego, IL, participated in many sports, and was the class valedictorian.  He was an attorney, retired, and a member of the American Bar Association.  He was a graduate of the U.S. Naval Academy and a veteran of the United States Air Force.

Herbert was preceded in death by parents, Herbert J. Sr. and Dorothy, nee Renner, Lantz; and one sister, Rita Wolf.

I’m so sorry for your loss. You have to be so proud of your father/brother/grandfather with all that he accomplished in his life. Prayers for your family Stefanie and Teddy.

I was so saddened to read of the passing of Mr. Lantz. He was such a kind, fair, and intelligent man. I will be praying for God to send comfort to all of his family. My deepest sympathies on the loss of your father and grandfather.

Aunt Shirley & I wish to send our condolences to the children of Herb on the death of there father. We also wish to thank them for the care they gave him during his last days.
Aunt Shirley & Uncle Bob