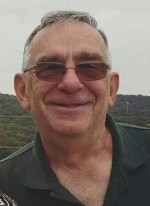 Mr. Poor was a Technical Sergeant with the United States Air Force, where he worked as a machinist before his retirement.  He was a member of the American Legion and a volunteer at Memorial Hospital, Belleville.  Herbert also served as a Special Olympics volunteer and a youth mentor.

He was preceded in death by his parents, Kenneth and Eleanor, nee Mackinney, Poor.

Surviving are his wife of 43 years, Jirawan Poor, whom he married April 2, 1973 in Thailand;
a daughter, Teshni (Kevin) Thouvenot of Swansea, IL;
a grandson and a granddaughter, Nickolas and Brooklyn Thouvenot of Swansea, IL;
two brothers, Clifford Poor of Massachusetts,
and Ken Poor of South Carolina;
five sisters, Barbara Powers of Ohio,
Carol Saulnier of South Carolina,
Nancy Haug of South Carolina,
Joanne Collins of Oregon,
and Linda Godtland of Massachusetts;
his beloved dog, Romeo;
many nieces and nephews;
and dear friends and neighbors.

The family would like to express their sincere gratitude to the staff at Memorial Hospital for their loving care and concern.

Memorials may be made to the Belleville Area Humane Society, to the Memorial Hospital Foundation, or to Operation Smile. Condolences may be expressed to the family online at www.rennerfh.com.

Visitation:  Friends may visit with the family from 4 to 7 p.m. Friday, February 17, 2017, at George Renner and Sons Funeral Home, Belleville, IL.

Funeral:  A sharing of memories and military honors will be held at 7 p.m. Friday, February 17, 2017, at George Renner and Sons Funeral Home, Belleville, IL.