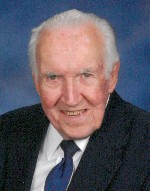 Homer attended Belleville public schools and graduated from Washington & Lee University, Lexington, VA, Class of 1939.  A World War II veteran, he served in the U.S. Army from 1942 to 1946.

Mr. Weidmann followed his paternal grandfather and his father as CEO of Belleville Shoe Manufacturing Company (1952–1982) and was succeeded in that career by his son, Eric.

In 1948, he was awarded the Jaycee Civic Achievement honor.  Homer was a Boy Scout leader, the first president of The Belleville Community Forum, and served on various local boards, including Memorial Hospital since 1972.  He had been a lifetime director of the American Footwear Industries Association and had served as honorary chairman of the Belleville YMCA Building Campaign.

Homer and his wife Jane had been members of First United Presbyterian Church, each having served on all boards associated with the church.  He was chairman of the church building commission, which, in 1963 under the leadership of Rev. Fred M. Cornell, moved the congregation from South High Street to its present location at Royal Heights Road and Route 161 and constructed the first unit (chancel) of the new building.

He was preceded in death by his wife of 63 years, Jane, nee Gunn, Weidmann, whom he married on August 16, 1947, and who died on August 14, 2010; his son, Eric Weidmann; his parents, Walter E. and Olivia, nee Steudle, Weidmann; and two sisters, Kathryn McCoy and Marian Short.

Memorials may be made to First United Presbyterian Church, to Memorial Hospital, or to the charity of the donor’s choice.  Condolences may be expressed to the family online at www.rennerfh.com.

Visitation:  Friends may visit with the family from 9 to 11 a.m. Wednesday, March 23, 2016, at First United Presbyterian Church, Belleville, IL.

From one Presbyterian to another–blessings.

Dede & family, you all have our deepest sympathy & in our thoughts and prayers. He was such an awesome friend and will be missed by all who knew & loved him R I P HOMER . Now you re up there with Jane & Charles looking down on us all . Someday we all will be together again .

Our deepest sympathies on the passing of a true friend of our community.

Mr. Weidmann and his late wife Jane joined the St. Clair County Historical Society in 1972 and were steadfast supporters of local history for over forty years.

Our kindest thoughts are with Dede Farquhar and the entire family as they grieve.

I just have to add my condolences to all the others you have received. I knew your family through St. Louis Gateway Cursillo Community. I pray for you and yours. DeColores