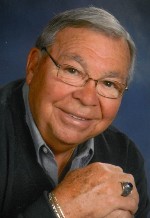 Howard, a wonderful husband and dad, was a force of nature. There wasn’t anything he wouldn’t tackle. As a child, he was always moving, keeping his mom very busy caring for him. This high energy carried into his adult life. He enlisted in the Army and spent his tour of duty in Ponce, Puerto Rico, loving every minute of it. He spent 34 years as an educator at High Mount School and worked part-time for 28 years at Home Brite in the paint department. Hard work defined him.

He loved his role as a teacher. His goal was to impart his love of history to his students. He was innovative and energizing, inspiring his students to set high goals and attain them. Reach for the stars was his motto. He was a basketball, baseball, and softball coach, but it was his role as a basketball coach which allowed his skills to shine. He took his team to the 1968 and 1969 Feeder Tournaments, with them emerging as champions-an amazing feat for a school without a gym.

At home, taking care of the lawn was his passion, He was the first one on the street to start cutting grass in the spring and the last one to put away his lawn tractor.

In his downtime, he enjoyed playing Rummy and Trivial Pursuit with his in-laws and Poker with his buddies. He loved his vacations in Florida with his wife, spending time at the beach and playing the penny slot machines. He loved life, and he loved making people laugh. His smile could light up a room.

He often said, though, that his greatest accomplishment in life was his daughter, of whom he was very proud. He will be deeply missed. As one former student said, “They broke the mold when Mr. B was born.”

He was preceded in death by his parents, Elmer and Rose, nee Siroky, Boller; a sister-in-law, Mary Boller; his father-in-law and mother-in-law Jesse and Audrey Tinoco.

Memorials may be made to St. Michael’s Church, Shriners Hospital, or Association of the Miraculous Medal Address: 1811 West Saint Joseph St. Perryville, MO 63775. Condolences may be expressed to the family online at www.rennerfh.com.

Funeral: A Mass of Christian Burial will be held at 10 a.m. Wednesday December 21, 2022, with Fr. Jim Voelker officiating.