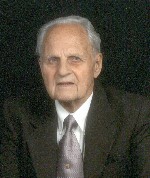 Mr. King worked in civil service at Scott Air Force Base in the transportation department. He was a member and a Deacon of First Baptist Church of Belleville for over 60 years. He was a member of the Belleville Senior Citizens, loved dancing, and was an avid St. Louis Cardinals baseball fan.

Visitation:  Friends may visit with the family from 9 to 11 a.m. Friday, November 3, 2017, at George Renner & Sons Funeral Home, Belleville, IL.