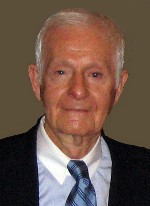 Howard was born February 12, 1918, in Belleville. Except for his military service, he was a life-long resident of Belleville. He attended Douglas Grade School and Belleville Township High School. While in high school, he played in the band and orchestra, as well as on the basketball team.

In 1936, Howard became an employee of Liese Lumber Company of Belleville. In 1971, he became President of Liese and continued to serve in that capacity until his passing. Throughout his nearly 80-year career of “going to the office”, Howard was passionate about addressing his customers’ needs no matter how big or small.

Mr. Lippert was a World War II veteran who served with the 5th Engineer Special Brigade during the D-Day assault on Omaha Beach, Normandy, France. For his unit’s service and heroism in the invasion, they were awarded the Croix de Guerre with Palm Leaf citation by the French Government issued by General Charles de Gaulle. While in France, he received a commission as a second Lieutenant in the Army. Following the invasion, he was awarded the Bronze Star Medal citation while performing duty as a Reconnaissance Officer against the enemy in Germany.

Howard was preceded in death by his parents, Oscar and Adele, nee Hock, Lippert; a brother, Floyd Lippert; brother-in-law and sister-in-law, Clarence and Ruth Gruenewald; and brother-in-law, William Reed.

The family would like to acknowledge the outstanding service the Home Instead staff provided to Howard. They are particularly appreciative of the amazing care and compassion provided by Aimee O’Leary. In addition, the family was extremely grateful for the extraordinary love, support, and care demonstrated by the entire St. Paul’s Senior Community “One South” Staff.

Memorials may be made to St. Paul United Church of Christ, to St. Paul’s Senior Community, or to the donor’s charity of choice. Condolences may be expressed to the family online at www.rennerfh.com .

Funeral: A celebration of life service will be held at 11 a.m. on Thursday, February 11, at St. Paul United Church of Christ, Belleville, Ill., with Pastor Drew Kramer officiating. A private entombment will take place at Valhalla Gardens of Memory, Belleville, Ill.

Dear Tommy and family:
You have my deepest sympathy. Your dad was a good man and you follow in his legacy.
I’ll always remember him in the back of the counter at the lumberyard.
Sincerely,
Gerald Altepeter

Howard and Mrs lippert were one of the best customers The White Cottage ever had. We missed them the last year, we would like to send a cod sandwich and ice cream cone to heaven for howard. Just a nice, nice, man.Our prayers are with him.

Tom and family – We just heard today of Howard’s passing. Perry, Larry, and I share your sadness at the passing of a man who truly deserves the title of “gentleman.” It was always our pleasure to sit with him at the annual Liese meetings. Like you, we will miss him. Bob Sparks