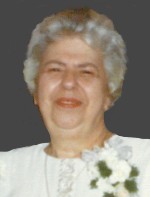 Mrs. Flassig retired from the accounting department at First National Bank of Belleville and was a member of the Retirees Association of First National Bank.  Irene was a member of St. Paul United Church of Christ, Belleville, IL, and a former member of the Quail Restoration Club.  She enjoyed quilting, crocheting, needlepoint, reading, and watching westerns and game shows on television.

Irene was preceded in death by her husband of nearly 55 years, Elmer Flassig, whom she married on October 25, 1947, and who died on October 21, 2002; her parents, Henry M. and Mary E., nee Barnes, Fehmel; two sisters, Marie Roeder and Eleanor (Maynard) Thompson; a daughter-in-law, Laurie Flassig; and a great-granddaughter, Kaitlyn A. Flassig.

Irene’s family would like to extend special thanks to the staff at Sycamore Village for the care she received there.