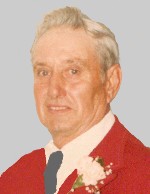 He was preceded in death by his wife of 62 years, Bernadine Fix, nee Landolt, whom he married on May 3, 1952, and who died on December 16, 2014; his parents, John and Josephine, nee Hoh, Fix; one half brother, William Smith; five brothers, John, Richard, Raymond, Lawrence, and Elmer Fix; and one sister, Helen Englerth.

Thoughts and prayers are with you.
Barbara Carroll

To the family of Irv Fix
As the former Highway Commissioner of Millstadt Twp I saw and spoke with Irv many times when he worked for Harvey and Bob. We would also speak with him at the Saturday Masses at Cathedral. He was a very nice man and we enjoyed our visits with him very much.

To the family of Irvin, sorry I missed you at the funeral home. Very sorry to hear of Irvin’s passing. Please except my symathy. Sincerely, Mark Forcade