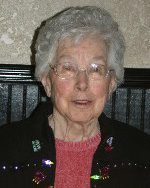 Mrs. Wittenauer was a member of the Smithton Senior Citizens, the Catholic War Veterans Auxiliary, the Daughters of Isabella, the Ave Marie Circle #980, and the Freeburg Extension Homemakers.  She was a member of St. Joseph Catholic Church, Freeburg, IL, and belonged to the women’s club at the church.

Isabelle was preceded in death by her husband of 48 years, Mark Wittenauer whom she married on October 29, 1947, and who died on May 7, 1996; her first husband, Lyle Thompson, who died in World War II; a daughter, Charlotte, nee Wittenauer, Anderson-Stookey; a grandson, Bobby Anderson; her parents, John and Frances, nee Neff, Kreher; two brothers, Clarence Kreher and Sylvester Kreher; and three sisters, Mary Braun, Agnes Gregson, and Eleanor Braun.

In lieu of flowers, memorials may be made to the American Red Cross Hurricane Harvey Relief, to the National Eye Institute, or to Family Hospice. Condolences may be expressed to the family online at www.rennerfh.com.