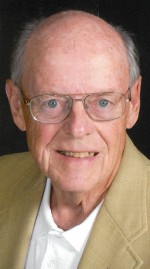 Mr. DeRousse was a Certified Public Accountant and the owner of the DeRousse Thompson CPA Firm in Edwardsville and Collinsville, IL, retiring in 1993. He earned an Associate of Business Administration degree followed by a Bachelor of Accounting degree from Saint Louis University, St. Louis, MO, graduating in 1964, and was a licensed CPA in both Illinois and Missouri.  Jay was a life member of the Illinois and Missouri Society of CPA’s and was a past-member of the Toastmasters International.

He was a 52-year member of St. Mary’s Catholic Church, Edwardsville, IL, where he taught religion and catechism classes.  Upon moving to Belleville, he joined St. Teresa’s Catholic Church and has been a member there for the last eight years and member and Treasurer of St. Teresa’s Young at Heart. The ultimate handyman, Jay could fix anything and spent his early retirement years rehabbing homes, and most recently served on the board for his local homeowners’ association.

Preceding him in death are his parents, Elmer J. and Marjorie I. Brewer DeRousse; a sister-in-law, Marlene DeRousse; and a brother-in-law Orville John Wellen.

Visitation:  Friends may visit from 9:00 to 11:00 a.m. Thursday, August 13, 2020, at St. Teresa’s Catholic Church, Belleville, IL. Standard CDC guidelines, including masks, will be in place upon entrance.

Burial will be at 2:30 p.m. at Calvary Cemetery, Edwardsville, IL.