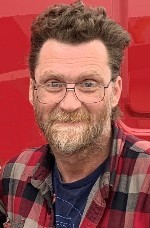 Jack was a truck driver for CR England Trucking.  He was a beloved husband, father, and Papaw. Jack will be greatly missed.

He was preceded in death by his parents, Ric and Emily, nee Conway, Byington; and a brother, Brian Byington.

Surviving are his wife of 24 years, Stefanie, nee O’Connor, Byington, whom he married on July 19, 1996;
a daughter, Briana Byington;
a son, Austin Byington;
a granddaughter, Meredith Walters;
a sister, Michelle (Robert) McGuire;
a brother, Michael (Luanne) Byington;
and three nephews and a niece, Vincent, Macey, Dustin, and Thomas.