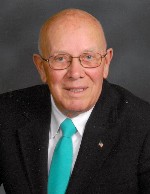 Jack was born and grew up in Eldred, IL, and wrote a book about it. His 4th year of high school was in Carrollton, IL where he met Carrol Reno, and they were married for 70 years. Jack and Carrol were partners in many adventures including, sailing the Caribbean and the Chesapeake Bay with CSA friends. They belonged to the Carlyle Sailing Association for over 20 years. He loved to cruise, as well, and took the whole family on a cruise in 2011 to celebrate their 60th wedding anniversary. He also enjoyed spending time with very special friends at the Red Coconut in Ft. Myers Beach. Jack worked for many years as an attorney before his retirement. He was a United States Army Korean War veteran and served more than 42 years in active duty and the United States Army Reserve combined. Jack was a member of Union United Methodist Church, Belleville, IL, and a lifetime member of the Masons. He was proud of his military service, and he loved his family very much. He was a great storyteller and martini maker. Jack will be missed by many.

He was preceded in death by a son, Bradley Woods; his parents, Colonel Crayton “CC” and Nina, nee Chapman, Woods; and a sister, Lora Woods.

The family would like to thank the nurses, doctors, and staff at HSHS St. Elizabeth’s ICU for the kindness and care shown to Jack and the family.

Memorials may be made to Union United Methodist Church, Belleville, IL, or to the National Federation of the Blind. Condolences may be expressed to the family online at www.rennerfh.com.