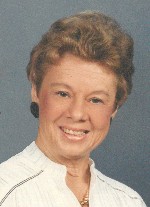 Mrs. Honer earned her master’s degree from of Southern Illinois University Edwardsville, and was a teacher at St. Augustine of Canterbury Catholic School, Belleville, IL, before her retirement.  She was a charter member of St. Augustine of Canterbury Catholic Church, Belleville, IL, and a member of the Queenship of Mary Sodality at the church.  Jacquelyn was an avid traveler and a former member of the Holiday Rambler RV Club.

Memorials may be made to St. Mary-St. Augustine Catholic School, Belleville, IL.  Condolences may be expressed to the family online at www.rennerfh.com.

We were shocked and saddened to hear about our neighbor Mrs Honer’s passing. Our deepest condolences to Mrs Honer’s family.

Sorry to hear about the passing of Mrs. Honer. I know she will be missed by many here but now she has joined the love of her life up above. What a wonderful life she lived up until the end!

So sorry to hear of Jackie passing, You all have our deepest sympathy. Because of health issues we will not be able to attend wake. We could never have had better neighbors than your Mom & Dad.