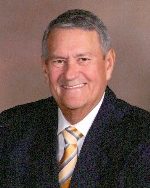 Jim was a 1960 graduate of Belleville Township and a United States Air Force Reserves Veteran. He worked with Marsh Company in Belleville as Director of Sales, and, with Cathy, as owners of The Abbott Company/Marsh Distributing in Milwaukee. Jim was especially proud of the role he played in revolutionizing the packaging industry.

Jim and his soulmate, Cathy, proudly raised a faith-filled, college-educated family, traveled the world, took innumerable midnight cruises under the stars on their boat, laughed every day, and loved each other unconditionally and eternally. Jim loved their lake house and all the memories created there, a Little Knights football coach, a jack-of-all-trades and master-of-none, a boat captain who relished slinging his grandkids off of the tube, a stealth dominoes winner (cheater), the luckiest nickel slot winner, a passionate debater of politics, a Green Bay Packer Backer, and the most good-hearted, fun-loving, optimistic man we knew.

Most of all, Jim was God’s child, and his faith in Christ sustained him throughout his life. He faced death unafraid, with no regrets, and happy to finally go home. Our world has lost a good man, but we know where he is – in heaven with his God and his loved ones, joyfully waiting for us to join him with three shouts of “Hip Hip Hurray!”