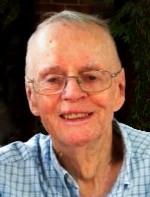 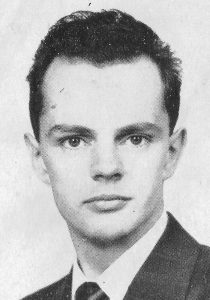 James Lyle Corcoran, age 91, died peacefully Tuesday, August 28, 2018, at Memorial Hospital in Belleville, Illinois. Jim was born on May 8, 1927, in Henderson Minnesota, son of the late James B. Corcoran and Olive (Doheny) Corcoran. Jim was devoted to his wife, Jeanne Anne (Diethelm) Corcoran, of 67 years. Together they raised nine children.

Jim was born and raised on a farm in Minnesota until beginning military service with the Army of Occupation in Erlangen Germany in 1945. James returned to Minnesota to pursue his education in the Advanced Air Force ROTC program at St. Thomas College. After receiving his Bachelor’s degree in Math and Physics, Jim was commissioned as a 2nd Lieutenant in the US Air Force.

Jim pursued a lifelong love of giving and receiving knowledge, becoming an instructor of Data Processing at Belleville Area College after retiring from the Air Force as a Lieutenant Colonel in 1970.

Family was always Jim’s priority, and his wife Jeanne supported him through many moves. Jim and Jeanne managed a busy life of military transfers with their growing family of nine children.

Jim was preceded in death by his son, Mark.

As an expression of sympathy, the family suggests contributions to one of the organizations for which Jim volunteered, the Pregnancy Care Center of Belleville Illinois, 301 W. Lincoln St., Suite 52, Belleville, IL 62220, 618-233-2273.

Memorial visitation:  Friends may visit with the family from 10:15 to 11:15 a.m. Saturday, September 1, 2018, at The Shrine of Our Lady of the Snows Apartment Community Chapel (The Esquiline), Belleville, IL.

Funeral: A Mass of Christian Burial will be at 11:15 a.m. Saturday, September 1, 2018, at The Shrine of Our Lady of the Snows Apartment Community Chapel (The Esquiline), with Fr. Joseph Ferraioli, O.M.I. officiating, with a reception to follow.