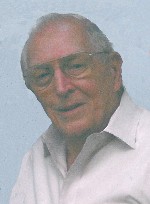 Mr. Darmstatter was a systems installer for AT&T and retired after 39 years of employment.  He was a member of the Belleville/Swansea Moose Lodge #1221, the Elks Lodge #481, and the Freeburg Sportsman’s Club.  Jim was a proud World War II veteran of the U.S. Army.  He served in Normandy, Northern France, Ardennes, Rhineland, and Central Europe, and was a survivor of the Battle of the Bulge. He was a past-commander of the Freeburg American Legion Post 550, and was instrumental in starting the program of putting the crosses in the Freeburg Village Park for the Memorial Day services.

He was preceded in death by his wife of 68 years, Berdine C., nee Koesterer, Darmstatter, whom he married on January 15, 1946, and who died on August 24, 2014; his parents, Louis C. and Lelia, nee Pitts, Darmstatter; and a sister, Geraldine (Orville) Nuetzel.

Memorials may be made to St. Jude’s Children’s Hospital, Memphis, TN.  Condolences may be expressed to the family online at www.rennerfh.com.

Please accept my sympathy on your loss I worked with Jim at the phone company.I had some good times working with Jim he will be missed.

Jimmy was a long time friend, fellow union member,and a good neighbor….He always had plenty of Pecans to share…I will miss him