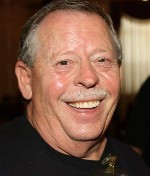 Mr. Hamilton was a 1963 graduate of Belleville Township High School where he played football. During and after high school, he was a member of the Belleville Black Knights Drum and Bugle Corps and also marched with the Brass Unlimited Drum and Bugle Corps. As his children grew up and enjoyed their membership in the Black Knights, Jim was the mechanic and driver of the busses carrying members to competitions and helped wherever he could.  He Judged many marching band shows throughout the Midwest.

Jim received his apprenticeship as an automotive mechanic in 1967 and continued in that line of work until his retirement from Medco in 2012. He loved drag racing in his early years, he was a charter member of the St. Clair Sandbaggers CB Club, and a charter member of the DeMolay International. Jim was a veteran of the Missouri Air National Guard.

He was preceded in death by his parents, James Oliver Sr. and Anna Margaret, nee Hargrave, Hamilton; and a grandson, Dacoda Ashtin Hamilton.

Jim was loved by his many friends and family and will be missed by all.

Funeral:  Friends may visit with the family from 2 p.m. to 6 p.m. Sunday, November 8, 2020 at George Renner and Sons Funeral Home, Belleville, IL.  Standard CDC guidelines, including masks and a limited number of visitors at one time will be followed.