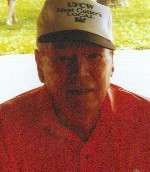 Mr. Hampton was a label machine worker for Morris Paint Company, in East St. Louis, IL for many years. Mr. Hampton was a United States Army veteran. He served in World War II and received the Purple Heart and two Bronze Stars. He was a member of the Veterans Association.

He was preceded in death by his wife of 70 years, Anna L, nee Wilson, Hampton, whom he married on July 25, 1947, and who died on November 24, 2017; his parents, Billy Bryant and Pearl, nee St. Clair, Hampton; two brothers, Billy and Richard Hampton; and a daughter-in-law, Christina Hampton.

The family would like to express their sincere thanks to the staff of Family Hospice and the staff of Four Fountains Convalescent Center for their loving care and support.

Memorials may be made to Alzheimer’s Association. Condolences may be expressed to the family online at www.rennerfh.com.

Visitation:  Friends may visit with the family from 12 to 1 p.m. Saturday, December 2, 2017, at George Renner & Sons Funeral Home, Belleville, IL.

Burial with military honors will be at Mt. Evergreen Cemetery, Millstadt, IL.