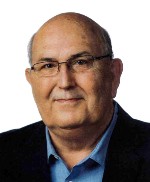 Jim attended University of Illinois before joining the United States Army during the Vietnam War. He worked for Monterey Coal Co. as an electrician before retiring in 1997, and then worked as the business manager for Beimfohr Associates Insurance Agency, Swansea, IL. He was a member of the Swansea Park Board since 1987, the Swansea Patriots, was past president of the Swansea Chamber of Commerce, and was a member and past treasurer of the Swansea-Belleville Midtown Lions Club. Jim was a member of Christ Church, Fairview Heights, IL, and was an avid golfer and trap shooter in his younger years.

Jim’s family would like to extend a special thank you to the staff at BRIA of Belleville, for their compassionate care.

Memorials may be made to the Swansea-Belleville Midtown Lions Club or the Swansea Patriots Inc., for the development of the parks. Condolences may be expressed to the family online at www.rennerfh.com.