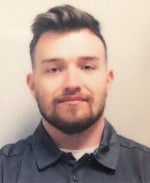 James was a graduate of Freeburg Community High School, Freeburg, IL.  He was a personal trainer and a security officer for Whelan Event Services. He was a U.S. Marine Corps veteran.