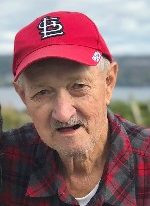 Mr. Thompson retired from Liese Lumber, Belleville, IL, after 30 years of loyal employment. He was a member of the Teamsters Union Retirees and a faithful member of Messiah Lutheran Church. Jim was an avid St. Louis Cardinal’s fan, a former St. Louis Ram’s fan, and a brief St. Louis BattleHawks fan “Ka-Kaw”. In his younger years, he played baseball and softball. He thoroughly enjoyed his summer residence in Charlevoix, MI.  Jim was a U. S. Army veteran.

He was preceded in death by his father, Clifford L. Thompson; and his mother and stepfather, Evelyn P., nee Vinson, (Charles) Jarvis.

In lieu of flowers, memorials may be made to Linus Blankets of Zion Lutheran Church, to Concordia Seminary, or to Heartland Hospice. Condolences may be expressed to the family online at www.rennerfh.com.