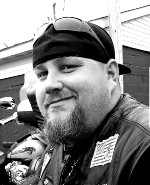 James was a diesel mechanic for Rush Truck Centers in St. Louis, MO.  He was a 3rd Degree Mason and member of the Fairview Heights Gothic Lodge, the Scottish Rite Bodies, and the Stone Templars Chapter of the Widow’s Sons Masonic Riding Association.

He was preceded in death by a sister, Roberta Lauf; and a brother, Daniel Lauf.

Memorials may be made to St. Mary’s Catholic Church, Belleville, IL. Condolences may be expressed to the family online at www.rennerfh.com.