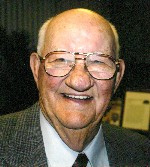 Mr. Montgomery enjoyed a 40-year career in banking, beginning with the National Stock Yards Bank in National City, IL, and finishing his career as a senior vice-president with Magna Bank of Belleville.

Mr. Montgomery was a U.S. Army veteran, serving his country during the Korean War, and was a member of Fairview Heights VFW Post 8677.

After his retirement, he was actively involved with the Belleville Kiwanis Club, serving as president, as well as holding other offices.  His volunteer services included many years at the Kiwanis Christmas tree lot, which he enjoyed tremendously.  He was also involved in the Meals-on-Wheels delivery program and with the St. Mark-St. George Food Pantry.

Jim enjoyed his pinochle friends at the Belleville PSOP.  He also enjoyed spending time at his farm and with his friends down in East Perry County, MO.

He was preceded in death by his parents, John M. and Clara, nee West, Montgomery; five sisters; and two brothers.

In lieu of flowers, memorials may be made to St. Mark Lutheran Church, Belleville, IL, or to Hospice of Southern Illinois.  Condolences may be expressed to the family online at www.rennerfh.com.

Lucy, we are so sorry to hear of Jim’s passing. We enjoyed the time we spent at PSOP with the two of you. We’ll pray for healing for the family.
K.Z. and Sharon

My thoughts and prayers are with the Montgomery family. I spent alot of time at the Montgomery home and always felt welcome. Mr Monty had quite a personality and will be missed.

Sorry for your loss. Jim will be missed in the Kiwanis, and other charitable organizations. My
condolences to the family.
Don Moser, Kiwanis

Lucy. Very sorry to hear about the passing of Jim. He not only was a close friend but obviously one of the best bankers of Southern Illinois that I have ever known. He will be missed by many.

My sympathy to you and your family on the loss of your loved one. My husband was in the Kiwanis with him. Virginia.