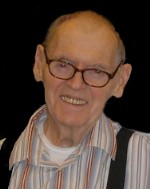 Mr. Murphy was a retired construction contractor.  He was a member of St. Teresa Catholic Church, Belleville, IL.  Jim was a U. S. Army veteran of the Korean Conflict.

He was preceded in death by his parents, James J. Murphy Sr. and Mary, nee O’Neill, Murphy; and a sister, Louise Colleran.

Surviving are his wife of 58 years, Pauline A., nee Madden, Murphy, whom he married on June 29, 1957;
two daughters and a son, Maureen Murphy of Washington, D.C.,
James III (Carla) Murphy of Portsmouth, NH,
and Martha (John) Dowling of Belleville, IL;
and five grandchildren, Kevin and Erica Murphy,
and Shannon, Patrick, and Erin Dowling.

In lieu of all other gifts, memorials may be made to the Alfa Foundation, 973 North Sixth St., Mascoutah, IL 62258, to celebrate people with developmental disabilities.

Funeral:  A Memorial Mass will be held at 11 a.m. Thursday, July 9, 2015, at St. Teresa Catholic Church, Belleville, IL.  Burial will be at St. Joseph Cemetery, Roxbury, MA, at a later date.