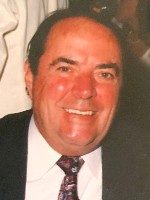 Col. Rafferty was born in Brooklyn, NY, and raised in The Bronx.  He attended Cardinal Hayes High School and City University of New York, later earning a bachelor’s degree at Florida State University and an MBA from the University of Utah.  In 1953, Jim married his sweetheart, Irene, and joined the US Air Force, becoming a navigator, navigator instructor, and then pilot on C-124 and C-141 cargo aircraft.  He served in Korea and flew missions into Vietnam.  As part of his duty to the Air Force, Jim and Irene moved their ever-growing family throughout the US, England, Germany, and back to the US, finally retiring from MAC headquarters at Scott AFB, IL in 1975.

After retiring from the Air Force, he became a professor of business and finance at McKendree University, SIU-E, and Saint Louis University.  Years later he launched a third career selling life insurance for the Catholic Knights and Ladies of Illinois.  The next chapter of Jim’s life unfolded when he met Judith Lynn, nee McKendry, marrying her in 1995.  They lived happily for 26 years in Columbia, IL.

In lieu of flowers, memorials may be made to the Evan Joseph Gerstein Foundation (www.evan4ever.org) in memory of Jim’s grandson who passed away at the age of 17 due to complications from leukemia.  Condolences may be expressed to the family online at www.rennerfh.com.