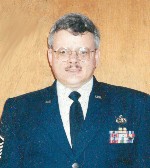 Print Obituary
Retired USAF MSgt James “Jim” J. Ross, 57, of Belleville, IL, born May 23, 1961, in Michigan City, IN, walked into glory on Friday, September 21, 2018, at his residence, after a 15 month -long battle with pancreatic cancer. Both sets of his grandparents and his number one hunting dog were there to meet him in heaven.

Prior to graduating from high school, Jim worked at Sullair tearing down and troubleshooting industrial air compressors.  After graduation from high school, he enlisted in the U. S. Air Force and rose to Master Sergeant during his 20 year-long career.  He was first assigned to basic training at Lackland AFB in Texas, then to Keesler AFB in Biloxi, MS, for training.  His first base assignment after training was Carswell in Dallas-Fort Worth, TX, where he worked personnel as part of the Strategic Air Command.  He retrained from personnel into computer operations / computer programming and was transferred to Scott AFB where he served as part of the 375th Aeromedical Airlift Wing, Military Airlift Command, Air Force Communications Command, AMC Computer Systems Squadron, and Air Mobility Command.  He served a remote tour in Woomera, Australia as part of the Space Command.

After retirement from the military, Jim worked many years as a computer programmer for the May Company (Famous-Barr), and most recently, worked ten years as a database administrator for Edward Jones.  Jim was a graduate of Southwestern Illinois College in Belleville, IL.  He was a descendant of the Cherokee Indian Tribe.

Jim enjoyed the outdoors and was a member of the International Bowhunting Organization and Archery Shooters Association.  He was a past member of the South County Archers and the National Field Archery Association. He shot archery tournaments throughout Illinois and Missouri and went to several national events.  He was also a member of the Amateur Trapshooting Association and once held the title of 2005 Doubles Champion for the state of Illinois.  He was a regular at the Grand American at Sparta, Illinois for many years.  Jim made many friends through his trap shooting and archery hobbies.  He was able to compete in his last Grand American shoot this summer and shot practice with Funny Car drag racing champion Robert Hight.

Jim is survived by his wife and best friend of 33 years, Jana, nee Trinder, of Belleville, IL;
a daughter, Rebecca Ross, who married Xavier Sage in October, 2017;
his parents, James A. and Linda, nee Poston, Ross of Lebanon, MO;
a brother, Michael (Patty) Ross of LaPorte, IN;
and a niece, Jennifer.

Jim also is survived by many aunts, uncles, and cousins.  He is missed by his friends at Townhall Archery and Kevin’s Archery.  He is also missed by his hunting dog Sassy and his buddy, Chicky.

Pancreatic cancer is a very aggressive disease with no cure and no unique symptoms.  Please take care of yourself. Lose weight, quit smoking/vaping, get some exercise, and enjoy a healthy diet low in carbohydrates. Obesity, smoking, ethnic background, and diabetes are all risk factors for this horrible, cruel disease. No one should ever have to endure it.

In lieu of flowers, memorials may be made to the World Bird Sanctuary, 125 Bald Eagle Ridge Road, Valley Park, MO 63088, or to Pancreatica (To Fight Cancer), 312 Fountain Ave., Pacific Grove, CA 93950.  Condolences may be expressed to the family online at www.rennerfh.com.

Visitation:  Jim wished to be cremated.  A memorial visitation will be held from 4 to 7 p.m. Saturday, September 29, 2018, at George Renner & Sons Funeral Home, Belleville, IL.

Funeral:  Interment of his cremains will be at Jefferson Barracks National Cemetery, St. Louis, MO, at a later date.