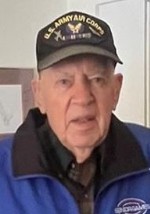 Jim excelled in many hobbies during his life. He was an accomplished swimmer who held a world record in the National Senior Games (Senior Olympics), as well as a member of US Swim Masters.  He was also an advanced woodcarver who won a national award through the VA. Mr. Scherbarth was involved with the communities he lived in, and was a former alderman of St. Clair, MI.

Jim was a World War II U.S. Army Air Corps veteran. He served as a First Lieutenant Pilot/Bombardier and was the recipient of the Purple Heart.  He loved his family dearly and considered his grandchildren and great-grandchildren to be his pride and joy.

He was preceded in death by his loving wife of 55 years, Mary, nee Lynch, Scherbarth, whom he married June 7, 1947, and who died February 11, 2003; his parents, Arthur and Meta, nee Brugger, Scherbarth; a son, James E. Scherbarth (Paul Mosley); a sister, Alice (Harold) Thaldorf; a nephew, Thomas Thaldorf; and an aunt, Elsa Brugger.

Memorials may be made to Paralyzed Veterans of America, or to the Benedictine Living Community at the Shrine, and may be sent to George Renner & Sons Funeral Home. Condolences may be expressed to the family online at www.rennerfh.com.

Burial with military honors will be at Fort Snelling National Cemetery.