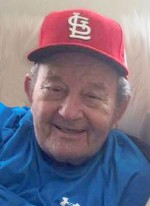 Mr. Smith was a retired auditor for Western Union.  He was a proud U.S. Marine Corps veteran of the Korean Conflict.  He was a Past-President of the Oakland Neighborhood Association.  Jim was a longtime member of the Fairview Heights Church of God as well as a lay minister at Christ Church, Fairview Heights, IL.  Mr. Smith enjoyed working with stained glass and was an avid coin and stamp collector. He dedicated his life to the Lord and his family whom he dearly loved.

Jim was preceded in death by his parents, Gallias and Galena, nee Barnett, Smith; and a brother Quentin Smith.

Memorials may be made to the Wounded Warrior Project.  Condolences may be expressed to the family at www.rennerfh.com.

Friends may visit with the family from 4 to 8 p.m. Wednesday, September 12, 2018, at George Renner & Sons Funeral Home, Belleville, IL.