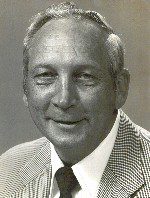 James was born on April 9, 1928, in Gadsden, AL, to the late Otis and Blanche, nee Scarbrough, Thompson.  He was married to Helen Louis Martin on August 8, 1954.  He had over 37 years of dedicated service to the government, including active duty military (Air Force, Army, Marines) and civil service in the Air Weather Command and Military Airlift Command.  He retired as deputy director of plans and management command data automation of the Military Airlift Command at Scott Air Force Base, IL.  He was also the proud founder and owner of TLM Telecommunications.

“If there be any truer measure of a man than by what he does, it must be by what he gives.”  He loved his family with all his heart and was loved just as much in return.  He was an avid golfer, loved playing the dice game “4-5-6”, and enjoyed traveling the world over the course of his life.  He had an infectious laugh, enjoyed talking business and politics, and always appreciated a good scotch.  He will be greatly missed by all who knew him.

He was preceded in death by his parents, Otis and Blanche, nee Scarbrough, Thompson; two sisters, Margaret Lewis and Evelyn James; and two brothers, Earl Thompson and Ray Thompson.

Memorial Services will be held at a later date.