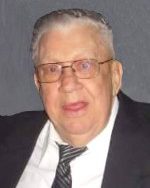 James was member of the Teamsters Local # 50. He was a truck driver for Rank Lumber and Hardware, O’Neil Lumber Co., and Mechanics Planning Mill. James was a United States Army veteran.  He enjoyed road trips, playing slot machines, and hunting.  He was a member of St. John the Baptist Catholic Church in Smithton, IL.

He was preceded in death by his parents, William E. and Loretta, nee May, Rank; a sister, Loretta Gregorich; brothers-in-law, Carl Gregorich, Donald Hall, Charles Nager, Robert Brinker; and a nephew, Christopher Gregorich.

In lieu of flowers, memorials may be made to the American Cancer Society. Condolences may be expressed to the family online at www.rennerfh.com.

Visitation:  Friends may visit with the family from 4 to 8 p.m. Sunday, October 8, 2017, at George Renner & Sons Funeral Home, Smithton, IL.