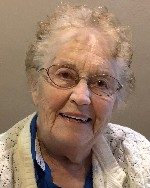 Jane was a loving mother, grandmother, and great grandmother.  She was a strong lady, the glue that held her family together.  Jane worked for Tribout Distributors for 54 years before retiring.  She was a member of St. Mary Catholic Church, Belleville, IL. where she participated in the St. Mary 4H Go-Getters and Mothers’ Club. Jane took great joy in caring for her granddaughter Jessica, who suffered from a brain injury.  She touched the hearts of many young people while helping children learn to read as a volunteer at Freeburg Elementary School as well as the public library.  Jane was an avid fisherman, reader, gardener and lover of animals.  To see Jane truly happy was to see her spending time with her grandchildren, great-grandchildren and great-great-grandchildren.

She was preceded in death by her husband of 59 years, Peter A. Rust, whom she married on February 7, 1953, and who died on May 11, 2012; a daughter, Mary Jane Rust; a son, David Peter Rust; her parents, Lester and Martha, nee Scheibel, Griebel; brother William Harrold Griebel Sr.; and son-in-law, Ed LePes.

In lieu of flowers, memorials may be made to the benefit of Jessica LePes at Citizen Bank of Freeburg.  Condolences may be expressed to the family online at www.rennerfh.com.