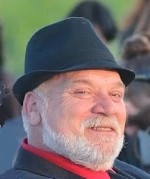 Jay attended St. Mary’s Grade School. He was a 1972 graduate of Althoff Catholic High School and attended Southwestern Illinois College. Jay was a milkman for many years for Reeb’s Dairy in Belleville. After college, he worked as an electrician in Davenport, Iowa and until recently, employed at Chart Distribution in Lincoln, Illinois. Jay was most comfortable under the hood of a car, behind the wheel of Fred, the family Winnebago, his savored solitude laps of pushing the mower across the lawn or camping out in the wilderness. He will be fondly remembered as someone to look up to, who could fix anything and kept his family running with the distant sound of a Cardinal baseball game playing on the radio. He is sadly missed as a loving brother and uncle and encouraging father, whose mentoring promoted him to grandfather. His actions were a mirror into his heart.