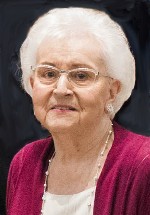 Mrs. Biekert was a homemaker and had worked at Streck’s Packing. She was a devoted member of St. Teresa Catholic Church, Belleville, IL, where she was active in the Perpetual Help and Young at Heart Clubs at the church.  Much of her life was spent providing loving care for her children, their grandparents, and extended family, especially upon the passing of her spouse.  Her success in life is demonstrated by her large close-knit family of which she was the true matriarch.  She will be deeply missed by all her loved ones and the numerous lives she enriched along the way.

She was preceded in death by her husband of 22 years, William J. Biekert, whom she married on April 21, 1959, and who died on December 17, 1981; a son, Thomas Biekert; her parents, Joseph and Agnes, nee Eilermann, Dulle; a grandson, Craig Biekert; two brothers, David Dulle, James Dulle; a sister, Anita and her husband Harley Rennhoff.

Funeral: A Mass of Christian Burial will be held at 10 a.m. Saturday, November 12, 2022, at St. Teresa Catholic Church, Belleville, IL.