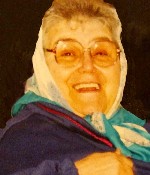 In 1962, Jean moved to Hawaii with her husband, Harold Cox.  She worked at First Hawaiian Bank until her retirement in 1980 after 18 years of service. She moved with her husband to Pahrump, Nevada, in 1981, and lived there until moving back to Belleville in 1999 to help care for her mother and her aunt. Jean spent her life caring for her family and friends, many of whom she met while playing bingo, an activity she loved.

She was preceded in death by her husband in 1996; and her father, Arthur Hise.