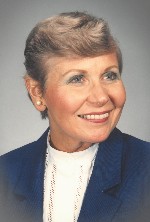 She was preceded in death by her first husband, Joseph A. Hausmann, whom she married on April 17, 1948, and who died on March 5, 1984; her second husband, Joseph D. Poskin, whom she married on September 19, 1987, and who died in 2001; her parents, Charles L. and Clara E., nee Rodenmeyer, Weygandt; a brother, Charles (Ann) A. Weygandt; and two sisters-in-law, Mary Ann Hausmann, and Dolores (George) Klein.

Memorials may be made to the Dammert Geriatric Center, Belleville, IL. Condolences may be expressed to the family online at www.rennerfh.com.

According to Jean’s wishes, her body has been donated to Saint Louis University School of Medicine.

Visitation: Friends may visit from 10 to 11:15 a.m. Tuesday, July 9, 2019, at The Esquiline Apartment Community Chapel of Our Lady of the Snows, Belleville, IL.

Funeral: A Memorial Mass will be held at 11:15 a.m. Tuesday, July 9, 2019, at The Esquiline Apartment Community Chapel of Our Lady of the Snows, Belleville, IL, with Father Thomas Hayes, OMI, officiating.