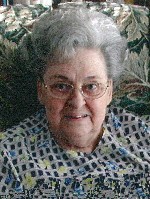 She was preceded in death by her husband, Clyde Russell, who died in 1999; her former husband, Ralph Scherer, who died in 1975; her parents Otis and Anna, nee Klingenhagen, Givenrod; two half-brothers, Oscar Heuring and Otis Givenrod II, and two half-sisters, Elsie Petri and Victoria Jung.

Burial will be at Mascoutah City Cemetery, Mascoutah, IL.