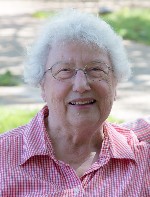 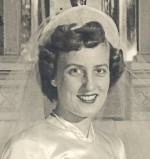 Jeanne Anne Corcoran, nee Diethelm, age 90, died peacefully Saturday, July 25th, at the Dammert Care Center in Belleville, Illinois. Jeanne was born on July 27, 1929, daughter of the late Anton Diethelm and Ida Diethelm, nee Wirtz, in Victoria, Minnesota. Jeanne was the devoted and loving wife of James Corcoran for 67 years until his death in 2018. Together they raised nine children.

Jeanne was born and raised in Victoria, Minnesota, a small town outside Minneapolis. She was an outstanding student and talented musician. In high school she played French horn and studied piano, becoming an accomplished pianist. She enjoyed playing piano through her adult life and passed on her talent as a piano teacher for many years.

Jeanne inspired, encouraged, and challenged both children and students alike to treat music as both a pleasure to self and as an obligation to share with others. She had a lovely alto voice and sang with choirs over the years, including the Offuttaires in Omaha and the church choir at Cathedral. James and Jeanne gave selflessly of their lives, home, and resources to encourage their children’s musical passions.

The work of Jeanne’s life was a devoted wife and loving mother to her nine children. During 20 years as a military wife, she uncomplainingly packed up and moved her growing family eight times until Jim’s retirement from the USAF in 1969. With Jim, they lived in Texas, South Carolina, Arizona, Pennsylvania, California, Wisconsin, Nebraska, and Illinois. While Jim served overseas, Jeanne returned to Minnesota to be with her family and receive much-needed support with a growing family. She was happy to finally settle down in Belleville after Jim took a job as an instructor at Belleville Area College after his military retirement.

After guiding her children through various – sometimes lengthy – roads to higher education, Jeanne joined the family with a college degree when she earned an Associate of Arts degree from Belleville Area College in 1985. Jeanne and Jim were generous and selfless volunteers, including Meals on Wheels and Pregnancy Care Center. Jeanne also enjoyed volunteering at the Althoff library.

As an expression of sympathy, the family suggests contributions to one of the organizations for which Jeanne volunteered, the Pregnancy Care Center of Belleville Illinois, 180 S 3rd St Belleville, IL 62220, 618-233-2273.

Due to COVID-19, there are no immediate plans for a memorial, but the family expects to celebrate Jeanne’s life on the occasion of her birthday, July 27, 2021.