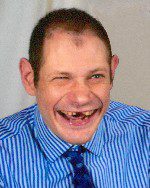 He was preceded in death by his maternal grandparents, Gerard A. and Dorothy D., nee Powell, Schneider; an uncle, Wayne Schneider; and an aunt, Carol Ann Schneider.

Memorials may be made to the Hospice of Southern Illinois or to Clinton Manor Living Center, New Baden, IL.  Condolences may be expressed to the family online at www.rennerfh.com.

Funeral:  Funeral services will be held at 11 a.m. Friday, May 25, 2018, at Victory Church, O’Fallon, IL, with Pastor Jon Cannon officiating.