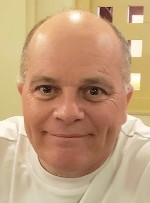 Jerry worked in IT as a computer security specialist. He was a published author who loved to write. Jerry was a communications specialist who obtained the rank of E5/SGT in the United States Army. He was a loving husband, brother, uncle, grandfather, neighbor, and friend.

Surviving are his wife of 32 years, Deirdre Leigh, nee Gordon, Gossett, whom he married on December 28, 1990;
three sisters, Gretchen (Paul) Davis, Gretta (Dean) Beckman, and Glenna Gossett;
two brothers, Jason (Kimberly) Gossett and Jeffrey Gossett;
four grandchildren, Christopher, Chloe, Summer, and Malachi;
a special great-nephew who was like a son to him, Christopher John Kohlberg;
many nieces, nephews, and cousins;
and his loving dog, Max.

In lieu of flowers, memorials may be made to the American Diabetes Association. Condolences may be expressed to the family online at www.rennerfh.com.