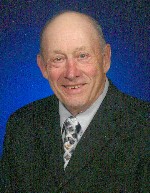 Mr. Touchette was a 1955 graduate of Assumption High School, East St. Louis, IL.  He was employed by Westerheide Sheet Metal for more than 40 years and was a proud member of the Sheet Metal Workers Local 268 retirees.

Jerry was an avid hunter and fisherman which he instilled in his family. He made sure his buddies always had a place to deer hunt, taking them to the family cabin. His bluegill fishing had no parallel. Jerry was told by his friends that his competitive nature brought out the best in them.

He belonged to many leagues and clubs, including euchre, pool, horseshoes, bowling, fast-pitch softball, slow pitch softball and beer leagues. He received a ring and plaque for bowling 300 during league play. He was most proud when his fast pitch team in the Belleville City League won every game in 1972 and he was awarded the MVP trophy. He was inducted into the Belleville City League Hall of Fame.

Jerry was always there with a helping hand, had a huge garden, and was adept around the house. Generous with his time and talent, he donated several boxes of trophies to special schools.

In lieu of flowers, memorials may be made to the Alzheimer’s Association, to Hospice of Southern Illinois, Inc., to St. John the Baptist Catholic Church Smithton, IL, or in the form of masses to the church. Condolences may be expressed to the family online at www.rennerfh.com.

Funeral:  A Mass of Christian Burial will be held at 11:30 a.m. Thursday, January 14, 2021, at St. John the Baptist Catholic Church, Smithton, IL, with Fr. Stanley Konieczny officiating. Standard CDC guidelines, including masks and a capacity of 40 attendees will be implemented at the church.