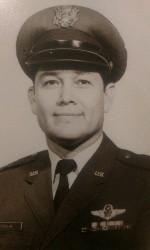 Print Obituary
Jesse Aguilar, Major USAF Retired, 90, of Belleville, IL, the cornerstone and inspiration of our family, died on November 29, 2019, at his home surrounded by his loved ones. He was born in Bloomington, TX, on December 8, 1928.

Mr. Aguilar proudly served his country for over 20 years as a pilot/navigator/staff officer, and while in the military he also graduated from Texas Tech University with a BS in Industrial Engineering. Following his retirement from Scott AFB Headquarters MAC, he continued his career working as an industrial engineer in private industry, eventually retiring as a security operations supervisor at Lambert Airport. He was a member of the Military Officers Association of America, Reserve Officers Association, and Knight of Columbus.

He was preceded in death by his parents, Nicanor and Maria, nee Ortiz, Aguilar; two brothers; and three sisters.

Surviving are his wife of 66 years, Barbara, nee Sanchez, Aguilar, whom he married on November 8, 1953;
three daughters, Diane (Steve) Hurst of Belleville, IL, Linda (Robert) Parsons of Belleair, FL, and Cindy (Mark) McKinney of Belleville, IL;
12 grandchildren;
and 21 great-grandchildren. He will be forever loved and missed.

The family wishes to extend a very special thank you to Heartland Hospice and the staff at Memorial Hospital, Belleville, IL