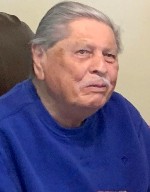 Jesse was a retired USAF Master Sergeant (MSGT) and served as a weather technician from August 1962 – August 1981. After retirement from active duty, he worked for the Civil Service Defense Information Systems at Scott AFB, IL, until retiring in April 2006.

He was preceded in death by his parents, Jesus Sr. and Consuelo, nee Lara, Vargas.

He is survived by his wife of 28 years, Mary, nee Haas, Vargas, whom he married on February 19, 1994; his children, Roger Vargas and his daughter, Gabrielle, Robert (Melody) Vargas and his son, Jared, and Richard (Carrie) Vargas; a stepdaughter, Cathy (Michael) Lippert, and her children, Clair Zimmerman and Grace Lippert; three sisters, Lucia ( Alvaro) Acevedo, Victoria (Moisesr) Gonzales, and Veronica “Betty” Salinas.

Memorials may be made to the National Kidney Foundation or to the American Diabetes Association. Condolences may be expressed to the family online at www.rennerfh.com.