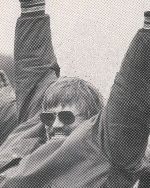 God bless you, Jim-Dad-Coach Monken.  You are the soul-mate to your wife, Barbara, and the ultimate father to your children, the ultimate son, big brother and uncle, a championship coach, a father-figure to so many and a genuine friend to all.  Jim connected with anyone he met, never met a stranger, and you knew where you stood with him.  Doing the small things well mattered, teach before telling, effort and honor and family and friends.  He treated all with a love, kindness and friendship that was deep, genuine and eternal.  His stories were epic, humor was uplifting, and coaching accomplishments were legendary.  He is irreplaceable, one-of-a-kind and a blessing from God.  He persevered the loss of his speech and remained as a hall of fame coach.  Even without his speech, he said more than most could ever with their voice…and never complained.  You rooted for Jim, and he rooted for you.  He is the greatest among coaches, the best friend among friends, the most amazing father, and the epitome of the devoted loving husband.  Jim is our hero.

Jim was preceded in death by his parents, Omer J. and Louise J., nee Steinkoenig, Monken; his father-in-law and mother-in-law, Max and Julia Yovandich; and one sister-in-law, Sue Monken.

In lieu of flowers, memorials may be made to the Coach Jim Monken Charitable Foundation.   Condolences may be expressed to the family online at www.rennerfh.com.