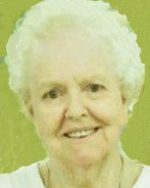 Mrs. Ainsworth graduated from Cathedral Grade School and Notre Dame Academy, both formerly in Belleville, IL. She then attended St. Vincent DePaul School of Nursing on Kingshighway Boulevard, St. Louis, MO, for two years before leaving to marry the love of her life, Otis Earl Ainsworth, whom she met through a pen-pal program while he was in the U.S. Navy.

After giving birth to two sons, Mrs. Ainsworth returned to nursing school at DePaul to gain her diploma, becoming the first married graduate of the school.  In those days, married females were not allowed to attend nursing schools. Mrs. Ainsworth then went to work at St. Elizabeth’s Hospital in Belleville, IL.  She worked there as a registered nurse for the next 30 years, retiring in 1984.

Joan worked on every floor and in every department of St. Elizabeth’s during that time, but was best known for her stint as head nurse in Pediatrics.  She won acclaim for her decision to get rid of the wheelchairs in that department and replace them with little red wagons.

Mrs. Ainsworth and her family were members of St. Luke’s Catholic Church and then St. Peter’s Cathedral, both in Belleville, IL, before moving to Fairview Heights and becoming members of St. Albert the Great Parish.  After retiring to her log cabin in the woods, the family attended St. Augustine of Canterbury Catholic Church, Hecker, IL, and finally, St. Michael’s Catholic Church in Paderborn, IL, where she served on the parish council.

She was preceded in death by her husband of 55 years, Otis E. Ainsworth, whom she married on October 30, 1954, at St. Peter’s Cathedral, Belleville, IL, and who died on November 15, 2009; her father, Joseph Balzer, who died before Joan’s birth; her mother, Marie, nee Eschenfelder, Balzer; and her very significant uncle who was like a father to her, Edward Eschenfelder.

Memorials may be made to St. Michael’s Catholic Church, Paderborn, IL, or to Hospice of Southern Illinois. Condolences may be expressed to the family online at www.rennerfh.com.